A smile is worth a thousand words

"Trust yourself and others will trust you too"

"Never forget that today's practice will be tomorrow's theory"

"If your dreams don't scare you, they aren't big enough"

"Build bridges every day and never burn them"

"Successful people usually do things that others don't like to do"

"In business nothing can be more important than a motivated team"

"Worst decision is better than no decision"

Maxim Behar is a leading Public Relations expert with wide experience and strong presence in many countries all over the world. He travels a lot and often speaks in front of world leaders audiences, practitioners, students, and opinion makers on Leadership, Modern Public Relations and Social Media topics.

Maxim is a past President of ICCO, the largest and most influential global organization of Public Relations professionals and practitioners and now is a President of the World Communications Forum Association, registered in Davos, Switzerland.

Нe is inducted in the Global PR Hall of Fame in London in 2017 for his entire work supporting and leading thousands of international PR projects and for his remarkable mandate as ICCO (World PR Organization) President.

Maxim's latest book The Global PR Revolution is among the best publications about Public Relations sold now internationally and was ranked by BookAuthority among top 5 new books on PR in the world.

He is a dreamer and hard worker for a better, more dynamic and more ethical world. Maxim is also a practitioner - he likes chatting, networking, serious business projects, social media, rock music, gadgets and traveling, meeting new people and facing new challenges, reading and writing. Also, he is a committed fan of golf, cycling and parachute jumping.

One of his favorite rules in life is: If your dreams don't scare you, they aren't big enough!

In 1994 Maxim founded M3 Communication Group, Inc., a leader in the field of public and media relations in Bulgaria. Since then he has been the company's Chief Executive and Chairman of the Board of Directors. Since 2000 the company is a partner of the Global network Hill+Knowlton Strategies.

Maxim Behar is Honorary Consul General of the Republic of Seychelles to Bulgaria. 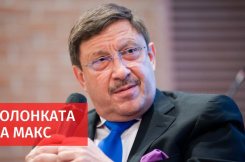 There's an elementary principle that the harder you try, the more what you want to achieve doesn't happen. Of course, it takes effort, of course it takes hard work to achieve your goals, but it also takes organization, predictable successes ... »